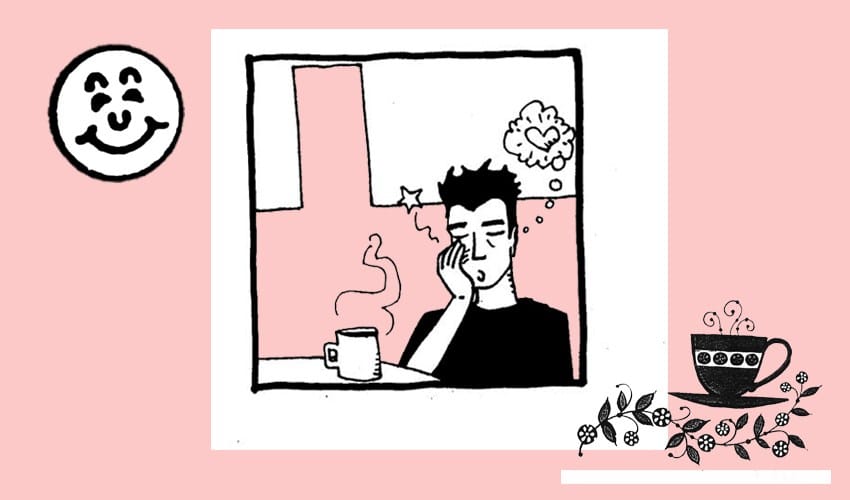 THIS YEAR, YOU NEED A CAFE TO HATE.

We all need a few cafes we hate. Pardon me. In 2017, the earth is not flat, but flat white and hating a café is close to blasphemy. But life is full of awkward situations and if you drag them all out in the comfort of your own home, you won’t be able to fetch a glass of water from the kitchen without tripping over a difficult memory or two.

The first café is innocuous enough. It’s proof that you’re a bad person because only the spite in you could make you have any sort of opinion about somewhere so harmless. It’s situated on a pretty turn on the road and there are tables outside for the summer. The décor is entirely composed out of mahogany (floors, tables, chairs) so the inside feels expensively airless. The waiters and waitresses never crack a smile and the food is overpriced and tasteless, but it’s not, you know, technically bad.

What you use this café for: telephoning your internet provider in your lunchbreak in the back room, so-so dates, soliciting tax advice from acquaintances.

The second café is chintzily pretty. The menu is great. They offer eggs, pancakes, muesli/yoghurt/fruit/nuts at unfeasibly low prices, in open disregard of the café’s ultra hip location. The waitress is sweet and has hair all the way down her back like Rapunzel. But! The food, while perfectly fine, leaves you feeling existentially empty. It is the gastronomic equivalent of casual sex with someone you have feelings for. You like it, you go back for more, a few hours later you feel like you have a sad weeping hole at the centre of yourself. You keep going back to the café anyway. Why would you do that to yourself? Don’t you have any self-respect?

What you use this café for: brunches where you invited too many friends who don’t know each other.

The third café is too small. There’s not really anywhere to sit and it’s always packed. You have an uncomfortable relationship with the barista there. He’s always switching between being pals with you and bullying you at whiplash speed and you never know which one it’s going to be. You avoid it if you’re feeling fragile but the coffee’s really, really good there.

What you use this café for: a colleague did something horrible and they said sorry but they know and you know it’s not enough. “Buy me a coffee?” you say, instead, and inevitably you end up here. A coffee’s not enough, either. But what would be?

The fourth café is in a much prettier neighbourhood you used to live in. Your parents like it. Visitors like it. Its overarching theme is stodginess: think armchairs with copper claw feet you’d find on the set of an Oscar Wilde play and two bread baskets with everything you order, including yoghurt. The armchairs don’t actually line up with the coffee tables so you’re always stooping for your food and spilling orange juice.

They have lit candles inside in the day and a piano in the corner and sometimes a musician comes into the room with great ceremony, attired in a dinner suit and plays for an hour or two and then no one’s allowed to talk in a voice louder than a whisper. When waiting for a table, wherever you stand, you’re always stood in the wrong place so waiters say “Excuse you” as they sweep past with a tray.

What you use this café for: entertaining visitors during visits that have lost their momentum. Feeling like you’ve lost interest in life in a particularly lush, moneyed way.

The last café is gently repugnant. Indoors smoking is allowed and presumably has been for decades. A window has never been cracked, ever. When you sit down, the sofa burps up a little smoke. When you swill down coffee and cake here, you could swear there’s a nicotine aftertaste. But hey – in the last days of gentrification, this place is as authentic as it gets. The other clientele is made up of elderly smoking men and big dogs. The dogs nod respectfully at you as you make your way out.

What you use this café for: swapping secrets that should be taken to the grave, since you’ll never see anyone you know here, ever. Soothing your troubled conscience about working a kind of bougie job and living in a previously affordable neighbourhood that now has rocketing rents. Can you de-gentrify via frequenting stubbornly ungentrified(/able) cafes? Discuss.

You can’t afford to move and your living space is far too small for excessive amounts of melancholy and bad memories. Take every unfortunate moment you have to go through, and endure it in a cafe you hate. It’s good for your local economy; it’s even better for your emotional feng shui. Win-win.

Daddy Issues
ON COMING OUT IN YOUR MID-TWENTIES
Project type
In Conversation With Jenny Hval: “The Music Industry Is Definitely A Vampire”