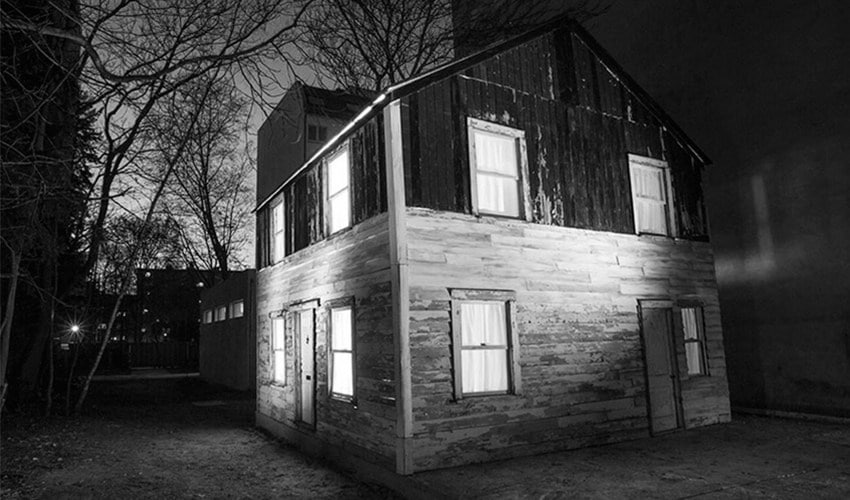 Is Moving Rosa Parks’ House To Berlin A Step In The Right Direction? It’s Complicated… (Part 1)

An essential part of the US’ civil rights history… has been moved to Germany. Rosa Parks’ House is now in Berlin. The American artist Ryan Mendoza brought the house (in which the civil rights icon lived after she fled the hostilities of the South) from Detroit to his backyard in Berlin-Wedding and will open the doors to visitors during Gallery Weekend. The White House Documentary, a film by Fabia Mendoza, Ryan’s wife, tells how the project came about and will be screened at the artist’s studio.

Rhea McCauley, Rosa Parks’ niece, asked Ryan Mendoza to save the house from being demolished by taking it to Europe after no American institution expressed interest in preserving it – something he had previously done with another blighted house in Detroit. We talked to the Berlin-based American artists Isaiah Lopaz (part 2) and Jessica Lauren Elizabeth Taylor about the White Saviour complex in the art world and what the project means for Rosa Parks’ legacy.

What were your thoughts when you heard that Rosa Parks’ house was now in Berlin as an art project because the city of Detroit was going to demolish it?

What are your thoughts now after you’ve met the Mendozas and Rosa Parks’ niece Rhea McCauley and know more about the project?

Jessica: Still questionable and critical. Having worked in the art world and in art institutions for the past couple of years and having been placed into certain boxes of making race-related work or being selected as the Black artist or being used and peacocked around, I’m generally distrustful of white people in the art world, so I asked the Mendozas about white saviordom and they didn’t respond with blank stares at all. They knew about it and they were responsive to the criticism.

In the first 5 minutes of the documentary locals say that people are always coming over to Detroit for poverty porn. And I thought it was really smart of the Mendozas to put the criticism right there, right throughout the film. When we talk about white allies we often talk about people who are putting their money where their mouth is and people putting their privilege where their mouth is. Standing up and saying: I’m going to use my privilege for good. And this is something I feel that Ryan is attempting to do. He’s using his name, he’s using his privilege as a successful white artist working in Europe, at this point almost a European artist, to get the story about this house and what’s happening in Detroit out – but I feel that somewhere along the way the story is lost. Most of the media I’ve seen has focused on Ryan. I haven’t seen a lot about Rosa Parks and that’s really sad and unfortunate.

So, who’s benefiting from the project?

Jessica: This is my question always: Who is this for? My big question is always about the gaze – who’s looking? I first saw Moonlight in the US, and then I saw it again in Berlin, and the part where Chiron takes out his grills before he’s eating gets a huge laugh from this Berlin German audience and I remember sitting there with a bunch of Black people thinking why is everyone laughing? And that to me is always a testament when you see films like these in theaters with a German audience: they are laughing for a different reason, and at a different thing. There’s nothing funny about that moment, it’s very didactic. You have to take out your grills to eat, it’s very simple. When we had the panel discussion at Babylon theatre there were 7 Black people in the room and that includes me, Rhea McCauley, Joel Boykin from Detroit’s pulsebeat.tv, Rhea’s son, Rhea’s daughter in law and two of my friends. There were 7 Black people there and I thought: who is this for? 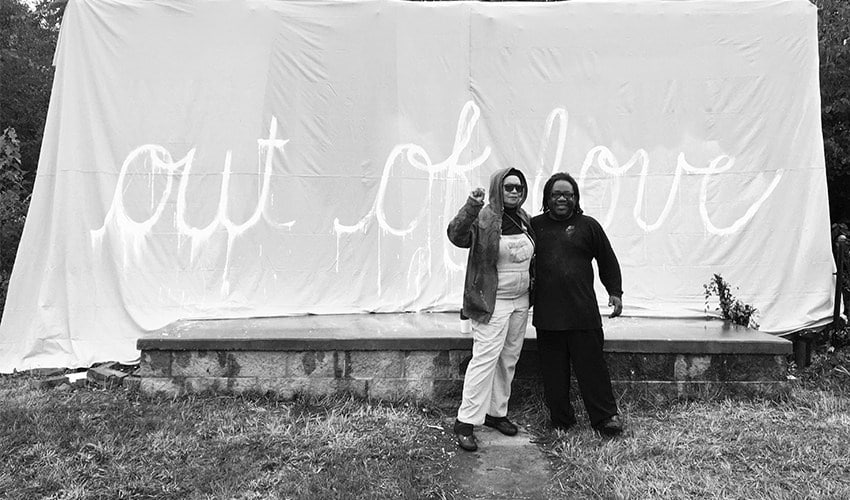 In the film Rhea McCauley says that Black people love America but that she wonders if America loves Black people. What did you think of that statement? Does Germany love Black people more than America does?

Jessica: No, not at all. The whole world is anti Black. It’s a question that Amandla Stenberg asked in her “Don’t Cash Crop On My Cornrows” video – what would it be like if America loved Black people as much as they loved Black culture? Black culture is always hailed as this musical haven but it is never used for its academic or intellectual properties. In Germany people always ask me if I’m a singer when I tell them that I’m an artist. Always.

People in Berlin like to think that they are post racial and that the problems with race and all of this are America’s problems. They think “poor Americans, they are so racist with their police violence and all of this” and they don’t really look at themselves and that’s what troubles me.

In one scene Ryan Mendoza asks himself whether the house is priceless or if it’s worthless. What are your thoughts?

Jessica: I think the house is totally priceless. It really baffles me that no American institution showed interest. Maybe it was because Rosa Parks only lived there for two years, but it’s the place that she fled to from the South, because she was getting death threats and the KKK was outside of her house after she was arrested. And so I think it has a historic significance because of that and because we don’t have many of these homes. We don’t have these privileges but there are all these white authors’ homes that are preserved beautifully. They’re even talking about selling James Baldwin’s home now, so I think it’s important, it’s totally priceless and I have no idea, I’m totally perplexed why no institution has been interested thus far.

Fabia Mendoza’s film initially had the sub title ‘Coming Home: The road to hell is paved with good intentions’. Is that also what’s happening with this project – good intentions that haven’t been thought through?

Jessica: Yes I think good intentions that haven’t been well researched and thought through – but there is still so much time. It’s not my job to come up with ideas how to make the house or Gallery Weekend more inclusive. I wouldn’t be shocked but I would be greatly disappointed if they don’t reach out to the ISD (Initiative Schwarze Menschen in Deutschland) or other organisations like mine for example. We’ve already met and I haven’t heard anything since. I sincerely hope that they will find a way [to make it more inclusive].

Jessica: Definitely. It’s so funny because oftentimes these liberal cultural institutions are the ones that are the most problematic. I see show after show after show of all white artists. And when I do see a Black artist or when I do see some representation of Black and brown bodies it is often in poverty or lately about refugees. It makes me really sad and jaded and that’s why I try to stay out of the art world. I think it’s very useful for art institutions to not recognise their privilege. It wouldn’t be fruitful in terms of money.

If a Black artist, hypothetically, decided to dismantle the house and bring it to Berlin to rebuild it – what do you think the outcome would have been?

Jessica: Oh it definitely wouldn’t have received this kind of press. No way. It’s been receiving press because of the controversy. Everything I’ve read starts with “the controversial artist Ryan Mendoza”. This would have gotten zero to no press if it had been a Black artist. People here don’t even know who Theaster Gates is, who works on projects in Chicago and is on the ground every day.

Jessica: No, I think the key is to employ people for consultation if they are really interested in working with race issues. With the Dana Schutz thing at the Whitney I remember people saying that she reached out to some Black people and I remember her comments were something along the lines of “oh, is Black pain only for Black people?” and I think that sometimes yes, some things are just for us. Everything doesn’t have to be taken and co-opted.

I don’t know how many exhibitions I’ve been at or I’ve been a part of where I’ve asked the curator “how come there aren’t any Black and brown people in this show?” and the curator always flushes red and the first thing they always say is that they couldn’t find any. That’s the #1 answer and I think it’s so lazy. It’s about looking in the right places. And then another thing I hear from institutions is that it is not profitable. People don’t want to see that. Critical race theory has become a trend in art and cultural institutions and it’s programmed more and more. I’ve been getting a lot more phone calls lately but I’m always conscious of trends doing what they naturally do, which is turn.

Do you find that contrary to white artists who can choose to focus on race issues, Black artists are expected to focus on them?

Jessica Lauren Elizabeth Taylor is a theater practitioner, social justice advocate and community organiser. Her roots are in the Southern United States, born in Mississippi and bred in Florida. Taylor’s work manifests through performance, text, dialogue, dance and community building for Black People and People of Color. Her work centers on themes of ritual, visibility and identity mythology. She is chiefly concerned with ways to dismantle oppressive institutions and the creation of racial equity in art and theater. Taylor is currently the Studio Grant Holder at District Kunst und Kulturförderung. In the fall she will begin a Master’s in Black British Writing at Goldsmiths University in London.

“The White House Documentary” will be screened at Studio Mendoza on Friday, 28 April and on Saturday, 29 April from 4-10pm. Rosa Parks’ House can be visited during the same times.

On 29 April artists from Detroit and Berlin will pay tribute to Miss Rosa Parks at an open mic session. The Mendozas are planning to organise a number of events at the house that are dedicated to Rosa Parks and her legacy.