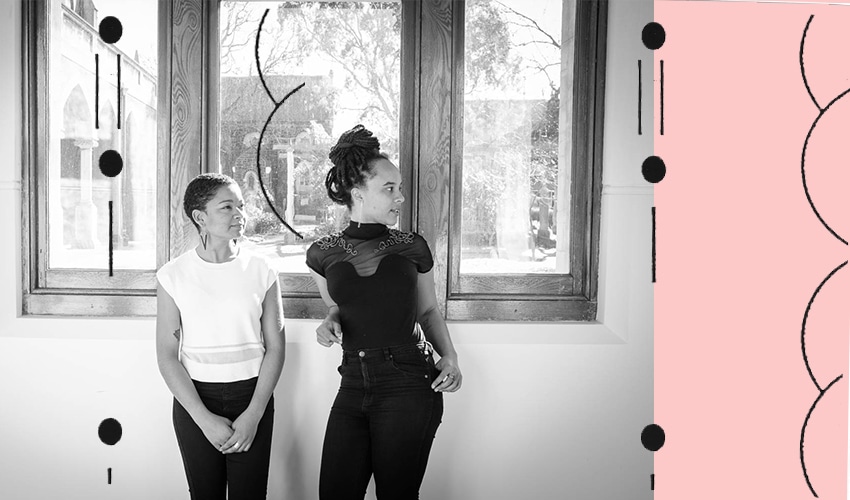 The Pin is a Melbourne and Hobart based platform about race, culture and identity. It is run by the two friends Lucie Cutting and Nkechi Anele who, growing up in Australia, never felt represented by mainstream media. They decided to start the platform to give other biracial and bicultural Australians a space where they can find, meet and express themselves.

Why did you decide to start The Pin?

Nkechi: The Pin grew out of a single question — where are you from? It seems simple enough but this was a question I was plagued with when growing up and a question Lucie was confronted with when she moved to another state. This seemingly simple question in Australia has the ability to make people (generally of colour) feel as if they don’t belong, even though they may have grown up here and lived here their whole life; because it makes the assumption that you are not from here.

The Pin also grew out of friendship. Lucie and I have been friends for over five years and the talks we‘ve shared throughout our friendship, whether about music, clothing, dating etc… has always lead us back to conversations about our identity. Lucie and I both identify as biracial Australians and from my experience having someone that gets what it’s like to be you is paramount to developing a strong and healthy sense of pride in oneself.

We wanted to create a resource where people could find themselves and share their stories because we felt that this was something we both craved growing up.

How often do you get asked “Where are you from?” or variations of this question?

Nkechi: It really depends on where I am and who I hang out with. I work at a bar and will generally get asked several times during a shift. It’s always really weird because I question whether it’s bad hospitality to not respond but, then I find that the people I work with (who don’t get asked this at all) get more frustrated with customers for asking me than I do. In those situations they normally answer for me by coming over and asking ‘Why do you need to know?”.

I recently visited Lucie and we went to a music festival where we got asked around 10 times over the course of three hours, with the added bonus of Lucie being mistaken for one of the artists who had played at the festival despite not looking like them at all — just because there were maybe only 10 black people at the event. It was even taken to the next level when we weren’t giving people the answers they wanted and they started asking our friends in front of us…which was an interesting experience. Luckily our friends are legends and don’t participate in that kind of conversation.

[In general] I think it’s weird when I tell someone that I was born in Australia and they ask me if I have been back to Nigeria. I also find it weird that people assume because I am black I won’t get sunburnt or that I will have a natural ability with sports and athletics — like melanin is a superpower.

How often do you get asked “Where are you from?” or variations of this question?

Nkechi: I think before this started I felt unsure of myself if someone questioned the validity of my experience but now I am a lot more open to have broader conversations about this. I strongly believe in the truth of people’s stories and if someone doesn’t empathise or believe people’s stories to be true I think it is their loss. I am also able to step back and try to look at and empathise with why someone finds these conversations hard and look at working on those walls and how you can break down those theories to help people to be more empathetic to each other.

Your interview with the Aboriginal elder Uncle Jack Charles ends with him saying “We saw, we wrote pictures and scenes of the land forming in dreamtime stories. There are no pictures of us here arriving by boats and all that. We were here all the time.” I arrived late at night on 26th January and in the following days I had to think of these words whenever I overheard conversations about Australia Day celebrations—what does 26th January mean to you and how did you spend it?

Nkechi: January 26th is Invasion Day, not Australia Day. Australia always was and always will be Aboriginal land. I don’t acknowledge it as a special date and spend it supporting people who want to see the date changed.

Nkechi: Australia is unique to the rest of the world because it is a country in denial about its own history and because of that, discussions about race and culture are hard, painful and angry. In Australia, people find it hard to have conversations about diversity that go deeper than the surface. We treat our Indigenous population like they are a burden that we are happy to treat as subhuman citizens still and even when we talk about them it is as if they don’t exist as a part of our society. On top of that we regard new Australians (who are labelled “immigrants” and “refugees” because they are not white) like they are the “other” as well.

What about Australia’s media landscape? At least abroad, it has a reputation for being right-wing, conservative and for making TV that fails to represent the country’s diversity. Do you feel like this is still true or are things starting to change?

Nkechi: I think it is definitely true. A lot of people who come to Australia are surprised by how diverse our population is because there is nothing to indicate that we are anything but white; at least if you go by the content [available via the] mainstream media. In my opinion I think that comes down to the people that are in charge of our media outlets who are white, male and from another era, because they (like many people, I guess) want to see themselves and their idea of Australia represented through their work and it shows.

I think the internet has provided a platform for more media diversity in Australia and worldwide. I am not sure if it will change through mainstream media as quickly as it is changing online but maybe audiences will turn away from traditional media to find the diversity they are looking for and that could feed into mainstream media like what we have seen in America with Issa Rae and Donald Glover etc… 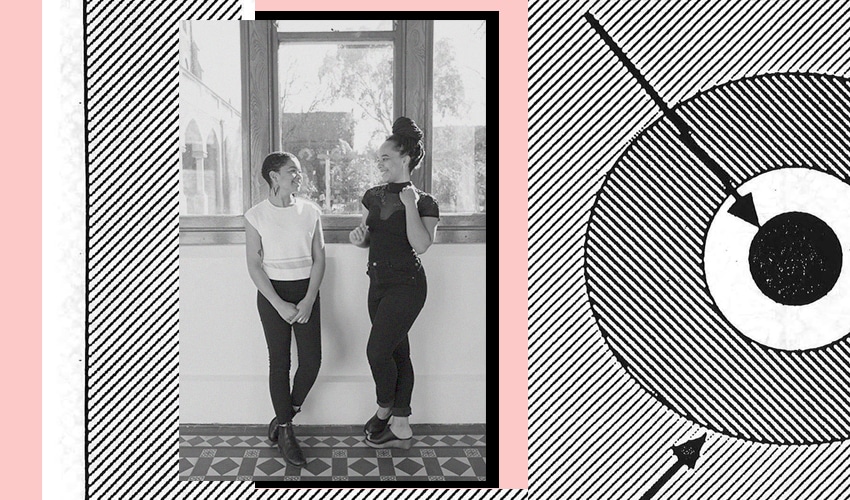 Going back to what you mentioned about the hope the internet provides as a platform for more diversity in Australia — could you name some of the people and projects who are helping to diversify the media landscape, music industry, art scenes etc.?

Lucie: Platforms such as Instagram and Facebook have been integral to us connecting with POC and promoting their stories to our Australian audience and beyond. Similarly, others are using these avenues (as well as radio and television) to promote diverse media. People such as OzAfricanTv, DJ MzRizk, Areej Nuur of 3CR, and BE. Collective to name a few. We follow some amazing people on our Instagram who are making waves in Australia and changing the faces we see in front and behind the scenes.

The Pin definitely wouldn’t be where it is today without these avenues, nor would we have the traction we’ve had. It’s both a positive and negative as it opens up opportunities but is also sometimes can be limiting if you’re not yet ‘likes popular’ and therefore deemed less legitimate regardless of content quality or intent. We’ve been incredibly lucky to have some strong and popular voices on our platform from day one. People like Shaun Tan, Uncle Jack Charles and Faustina Agolley — who supported the concept and helped it grow online through their own popularity. Since then, the internet has enabled people to find us easily and communicate directly.

In your series of video talks the electronic music artist Kira Puru mentioned how she regularly gets booked to play at the “world music” stage at festivals because she’s a woman of colour. Ajak Kwai, a musician from South Sudan also mentioned that, despite having made Melbourne her home back in 2007, she is still introduced as the “refugee from Sudan” at music events—why do you think people are so unwilling to change these narratives?

Nkechi: I think that comes down to how we talk about race and also, like the media, how festivals are booked and who is in charge of them. I think white people find it easier to call people of colour “worldly” or “cultured” but I think that leads back into the idea of “other” and treating other cultures as primitive, to be seen as separate to the modern everyday human. I personally hate the term “World Music” because are we all from the world? Technically every musician is from this world.

It’s a really colonialist term and idea that you are bringing foreign and “exotic” music to the mainstream listener and it’s really offensive — I think. The same thing goes for referring to people as “refugees” when they have lived in the country for so long and see it as their home. It put the them vs. us back in the mix. I am not sure if it is that people are unwilling to change their narratives. I think it is that people are unable to look outside themselves and empathise with someone else’s experience. I also think that people don’t like to have their fundamental ideas challenged or changed because it will mean that they are wrong and nobody likes being wrong.

What are the reactions you got after starting The Pin and how has the platform impacted your lives?

Nkechi: We have had really positive reactions to the site and it has reached out to people in ways that we did not expect. People we have looked up to and people we have admired have been willing to be a part of the site and we didn’t expect to have this kind of impact and success. There are a lot of things that this site has opened our minds to, especially around Indigenous Australians and wider communities of people of colour.

The impact of The Pin on our lives is that it has introduced us individually to a wider community of people from diverse backgrounds with amazing stories about their lives. I feel strong within myself as a biracial woman and I am proud of who I am on a much deeper level than when we started this project. I am not afraid to be myself and have these conversations with people. Race, identity and culture are not things for me to shy away from or cringe at anymore, they are things that are at the foundation of who I am and I feel a lot more love and understanding for other people and myself because of this experience.

If you could give your younger self one piece of advice about the skin you’re in, what would it be?

Nkechi: Be yourself — it is a beautiful place to be and you won’t believe how many adventures you’re about to go on.

This interview has been edited and abridged.

Stay in the loop by subscribing to our newsletter.

© We are DADDY Media UG