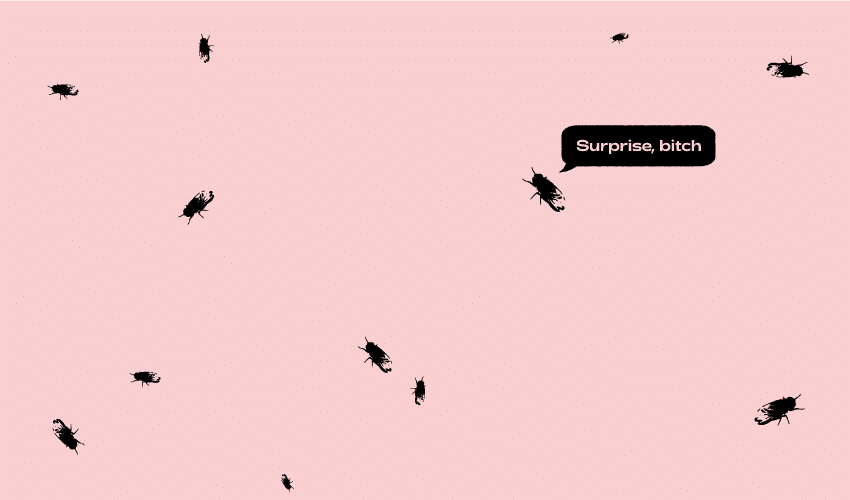 Greetings from the swamp. The first real sign of spring is not my sexy neighbour getting her biceps out or the willows trailing green into the canal, but the fact that yesterday I saw my first fruit fly. Berlin Bug Season is on its way and there is nothing we can do about it.

Berlin Bugs are gently charmed by the idea of repellants, cozying up to you with a winsome chuckle and a well, you tried. Berlin Bugs are intrepid adventurers and will find their way into every sealed bag and air-tight fridge. Berlin Bugs see through your attempts to trap them in long spiralling pieces of sticky cardboard that you will walk into in the middle of the night or strange glasses filled with honey and alcohol that will give your flat a slightly fermented air, like you’re an amateur winemaker just waiting for a vineyard of your own. Berlin Bugs swerve around all such traps with a nod for your effort, and settle happily onto your dessert.

While we spend April and May deluding ourselves about how this summer is going to be the best and brightest of our lives, that somehow the long winter has meant we’ve earned the kind of summer people write mediocre songs about, as we do every summer, we are ignoring the real truth of the season, which is that we live in a swamp and the Berlin Bugs are waking up. The caution is in the name; Berlin’s etymological history has roots in West Slavic languages, and the name “Berlin” itself probably comes from berl-/birl-. That means “swamp”. I guess if you don’t speak Old Polabian you’ve got no one to blame but yourself for missing the warning.

Every summer Berlin spends the long, hot days sucking up all the moisture from our hundred-odd lakes, and then every three days it spits it all down again. That means we get thunderstorms, which are worth it. There’s nothing like sitting in my flat with all the windows open watching the clouds roll in to break the heat and the lightning wiping the sky clean, Charli XCX on the stereo and my cat prowling about with all her fur standing on end.

But it also means the bugs swoon through muggy air that’s made for them. We’re the intruders, arriving with our suede jackets and Berlin ankles, but Berlin Bugs are generous hosts with a very liberal immigration policy. They are so excited to see us, and our fruit, and our cakes, and our sugary cocktails, and our delicious, delicious blood. 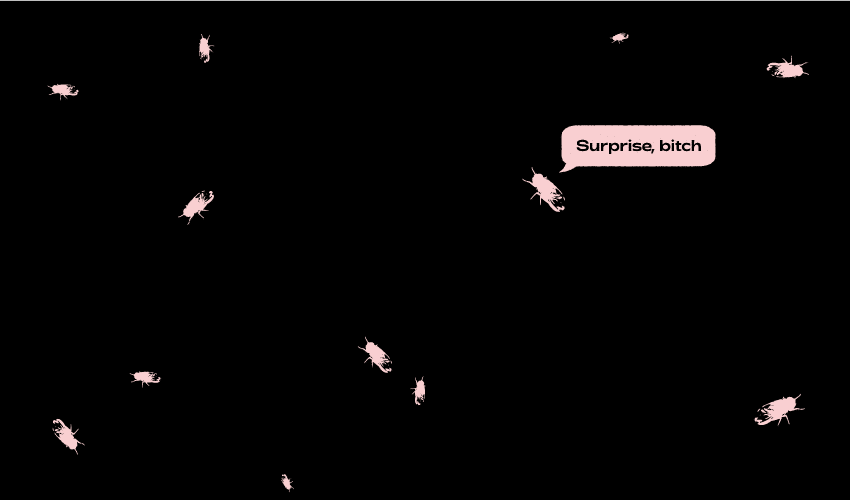 You can tell a lot about a person based on which summer they hate most. I will always prefer mosquito summers; they remind me of home, where every summer is a mosquito summer, and the acrid, almost pleasurable smell of the mosquito coils my dad would burn out on our verandah. Besides which, mosquitos are worthy enemies. If they can slip past my guard I deserve to itch for a few days, but at least I can smack them to bits whenever I spot them. Wasps are not only powerful but vindictive, and I’ve never quite gotten over the feeling that a wasp circling my picnic plate hates me on a very personal and visceral level.

But my wife hates mosquito summers above all else, because mosquitos love my wife. Mosquitos would wine and dine and take my wife on expensive holidays if they could, and because they can’t, they settle for nipping her to loving pieces whenever they can. Once we returned from a week camping in Rugen and counted 47 individual bites up and down my wife’s long legs. She spent the next three days camped out in ice baths, on-and-off feverish from the shock, while the German pharmacist interrogated me as to my motives and drug mule capabilities before reluctantly handing over a single tube of anti-itch cream that might as well have been milk. We medicated instead with alcohol, with the result that I finally found her happier, and bougier, than she had been in weeks, sitting in an ice bath with a glass of rosé, flipping in a desultory fashion through an IKEA catalogue.

My suspicion is that this summer will be a mosquito summer. It’s in the air, which keeps dipping teasingly into showers, and anyway, it’s their turn. Get your friends/family/lovers back home to send your country’s best over-the-counter antihistamine now, because you’re sure not going to get any here.

Instead, Berlin will fill up with its usual hippie tricks of catching flies and we will all turn collectively into the children of summers long gone, covered in mozzie bites and running shrieking from the sight of every airborne menace. Berlin Bug Season is the true meaning of summer, not some idyllic pop song dream but something grimy and itchy and somehow thrilling, like the moment when you break through the scab and draw fresh blood. See you on the other side.