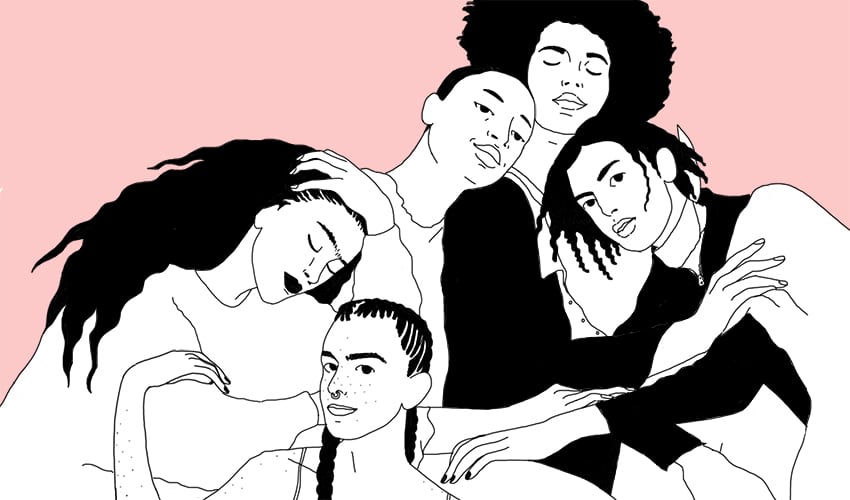 This December, we wanted to hear your thoughts on COMMUNITY. We wanted to know what brings you together, gives you shelter, peace or simply a little less loneliness – and you delivered.

In recent years, Black women have been dominating the covers of fashion magazines such as Elle, Vogue, Marie Claire, celebrating the melanin richness and creative coiffures of writers, fashion designers, and more. These Black women are featured because they have excelled as cultural producers and many of them have become iconic household names—Beyoncé, Issa Rae, Lupita Nyong'o. Their image and success have conjured up such phrases as “melanin poppin” with a new revival of the 1960’s mantra “Black is Beautiful.” While Black women have been rejoiced on these platforms, this has not always been the case.

Many Black women that I grew up with had kinky curly hair and articulated their complicated and layered hair stories. Some harped over the labor it took to straighten their hair with a hot iron and others would straighten their hair with a sulfur-based chemical relaxer wanting to replicate a Jane Fonda look. These ritualistic acts were concerned with one thing—disentangling the curl.

I have never loved my hair mostly because I was always told that there was something wrong with it and that it had to be manipulated. Having lived in three continents—Africa, Europe, and North America—my hair care journey has been an internal struggle clouded by external limits. From early on, my 4C hair has been disregarded as “bad hair,” leading my family members to chemically straighten my dark coils. At the age of 13, when I learned about the sulfur-based products in chemical relaxers, I decided to set myself on the path to natural hair. With very little guidance and encouragement from my family, I did what I could best, I either kept my hair short, wore locks, or had my hair braided. One of the many things that are difficult about living in Germany is that so many of the hair care products do not work for my 4C hair. Beyond that, the Black hair care industry often has items that are overpriced and unaffordable. The process of working with hair that is disregarded has been a lifelong journey.

What I perceived to be a personal struggle for managing my hair extended even to the demi-gods amongst us who also spoke about their hair woes. The Black American poet, Maya Angelou once remarked, "Whenever something went wrong when I was young - if I had a pimple or if my hair broke - my mom would say ”Sister mine, I'm going to make you some soup. And I really thought the soup would make my pimple go away or my hair stronger.” For Black women, including myself, the hair journey can be an arduous path entangled in moments of despair so it is no accident that a new generation of people are trying to challenge these falsehoods and create new spaces for Black beauty.

In North America and Europe, Black hair care has evolved to incorporate more expansive and healthier approaches to discussing and displaying curly hair. From New York City’s Curl Fest to the visual archives of Afropunk, the African diaspora have found various meeting points to document the diversity of hairstyles and expression. In Berlin, where I live, Afro-Germans hosted the first annual Curl Con, that featured workshops, Afro-centric hair & skin products, food, and more. While speaking with Sarah, aged 35, at the festival, she remarked, “I was born in Germany and I can relate to every story every hurdle. It is tough. We are so beautiful. Girls talking to girls. There are models we need each other.”

In an age where people are dispersed, finding products that make one beautiful can be costly when one is a minority. The beauty concerns of Germany’s 2 million Afro-German & other African descended inhabitants is not a small matter given that some African descended are not sufficiently served in the hair & beauty industry. At the same time, their concerns speak to a wider problem in the beauty industry in Europe and beyond. As Funmi Fetto has written in The Guardian, gatekeepers of the beauty industry fail Black women precisely because they do not attend to curly and kinky hair care and the range of skin tones. Moreover, there are often difficulties in transferring knowledge about hair care within the community when the African diaspora is so diverse.

Another fault line of the hair care industry is that African descended people can spend up to three times more on hair and body care. What this goes to show is that racism is costly. What this shows is that people with curly and kinky hair textures might well often spend more to attend to their beauty needs. Even more egregious, as Oluwaseun Matiluko wrote about in Gal-dem, is that the beauty industry does not always pay attention to the concerns of Black women and other women of color.

Black Hair is political not because we want it to be but because these industries were not designed by us and made for us. For many African descended people who are far away from home, developing a community with other Black people can provide the opportunity to rant, share stories, and cope with hair woes. That is why it is important to have forums, spaces, and gatherings that center curly hair specialists who can provide advice, without judgment. My hair journey is currently being realized in Germany, where the African diaspora is allowing some people to celebrate their curls rather than simply suppress it. Nevertheless, more can be done to make Black hair and skin less taboo and more inclusive—one that fosters healthy relationships with Black curls.

Edna Bonhomme is a historian, writer, curator, and lecturer whose work interrogates disease, gender, surveillance, and embodiment. Edna earned a PhD in history of science at Princeton University with a dissertation that examined plagued bodies and spaces in North Africa. Her creative projects are guided by diasporic futurisms, herbal healing, and bionic beings. She is co-creator of the podcast, “Decolonization in Action.” You can follow her on twitter: @jacobinoire

Daddy Issues
Queering safer spaces
Daddy Issues
The Blaq Agenda: We decolorized our pleasure – and felt more liberated than ever before